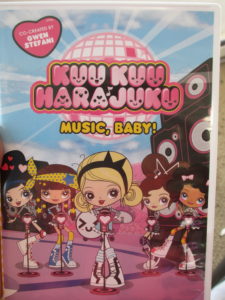 I had no idea what this great kid’s movie was when I got the chance to review it.  When I saw that it was Co-Created by Gwen Stefani I knew it had to be awesome.  My son loves movie with music he can dance to.  When it’s a cartoon that also keeps his attention in between dancing it’s even better.  This is a great cartoon about 5 girls who are in a band, but right before they are about to preform something crazy always happens.  I love that the cartoon is not only written well but the graphics are so cute.  If you have a little one that loves music and adventure this is a great DVD to add to your collection.

AS SEEN ON NICKELODEON 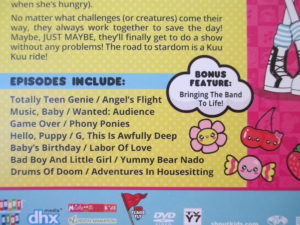 The animated series KUU KUU HARAJUKU follows the fun-filled adventures of the band HJ5 – Love, Angel, Music, Baby and G – through their super kawaii (cute) world of music, fashion and style. The inspiration for this popular animated series came from Grammy® Award-winning musician Stefani who wanted to create an animated series for girls that encourages and celebrates creative self-expression, imagination and individuality.  The show’s setting is inspired by the exuberant street fashion and creative youth culture of the Harajuku district but it takes place in a magical fantasy world like nothing you’ve ever seen before.

G is the lead singer of HJ5. She’s a natural leader and an amazing friend. She’s positive and enthusiastic, and fond of saying “Tick tock, time to rock!” Love is a fashionista, a great dancer, and cute as a button. She’s also a genius who often saves the day with her inventions. Angel is super chic, fun and enthusiastic. This fashionista has 325 pairs of shoes, and even her accessories have accessories! Music has a tough girl attitude, and is brutally honest. She brings a hint of edge and attitude to the group, and is fiercely protective of her friends. Baby sees the kawaii in all things: babies, puppies, rattlesnakes… She sees the good in everything, and also knows how to take care of herself. As G says, “Baby can charm the fire out of a dragon.”

Then, there is Rudie Rhodes, HJ5’s well-meaning but semi-incompetent manager. He books the band on all sorts of gigs, and they are happy to play anywhere, but dealing with villains, aliens and general Harajuku weirdness makes it impossible for them to ever finish a concert! 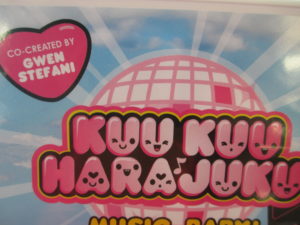 Drums of Doom / Adventures In Housesitting

Want even better news they have offered one lucky U.S reader their very own copy.