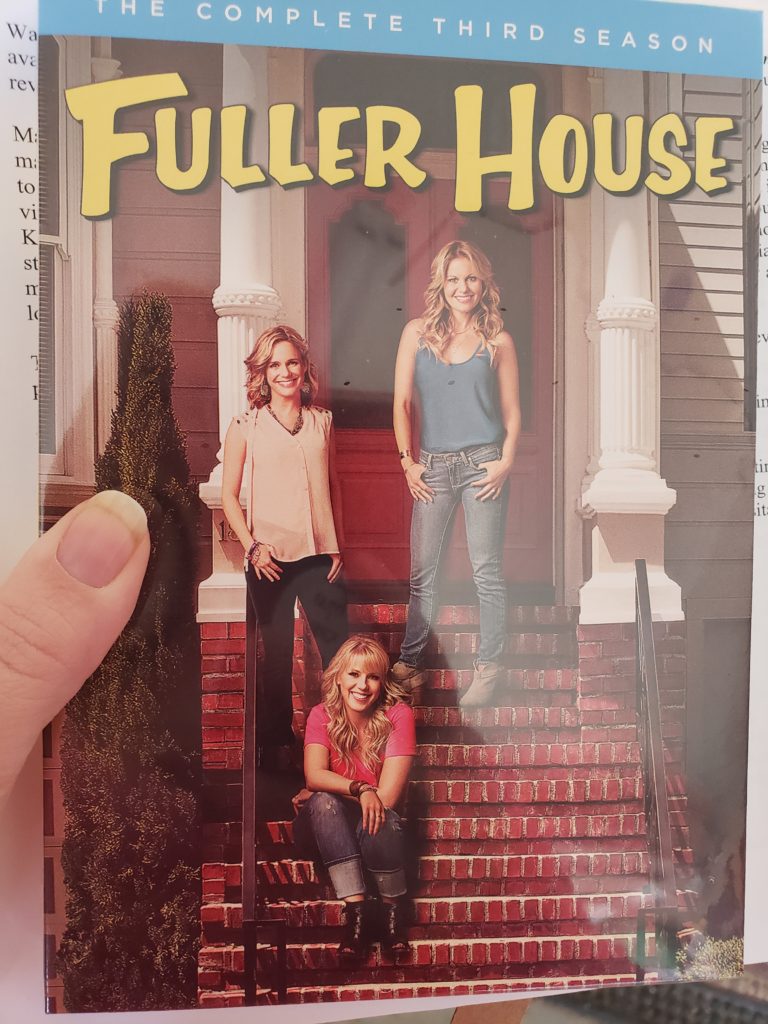 When Fuller House first came out I knew I was going to love it.  I love that they did not just re make the original they continued with the same great story I love. We have grown up with these girls so when it started I was already invested in their life.  Now that we have gotten to season three I was wondering where D.J’s life was going.  She has a great boyfriend and business partner, but we all know who she really loves Steve.  Will she tell him? will she stay with Matt?

A lot of us were still invested in Steve from the 90’s so I could not decide who I was voting for.  Steve is a great guy we already know.  Matt Is a great new funny guy who is great with animals.  We will see who she picks in this season and how it effects everyone else.

While all this is going on we are also following Stephanie’s journey to become a month and the twists and turns that takes.  I have to say this has been the best season so far.  I love that I can have this whole great season on DVD to watch any time.

THE TANNER FAMILY ADVENTURES CONTINUE ON

Major life events take place on the third season of Fuller House. Steve and C.J. make plans to get married in Japan and the gang heads overseas for the big wedding, but before anyone has a chance to say “I do,” a big revelation has an impact on the nuptials. Plus, Stephanie makes plans to get in-vitro fertilization, D.J. tries to get Tommy into a prestigious preschool, and Fernando buys Kimmy’s childhood home and restores it to its former glory. Meanwhile, Jackson and Ramona start high school where Ramona tries out for her school’s dance team while Jackson becomes a joke at his school after slipping on a piece of bologna during lunch. Joey, Jesse and Danny come home to celebrate 30 years since they initially moved in together to raise the Tanner girls. It’s an unforgettable season filled with laughter and love for the Tanners and their friends on this beloved family comedy.

The series, which has earned a 2018 Primetime Emmy® Award nomination for “Outstanding Children’s Program,” has already been renewed for a fourth season on Netflix.

“Fuller House is a hilarious and touching series that keeps getting better season after season,” said Rosemary Markson, WBHE Senior Vice President, TV Marketing. She added, “The way in which this program came back to television after so many years and managed to completely captivate multiple generations of viewers all over again, is remarkable. We are delighted to release another season of this wonderful comedy on DVD.”

The third season of Fuller House will be available to own on Digital on January 22, 2019. Digital purchase allows consumers to instantly stream and download all episodes to watch anywhere and anytime on their favorite devices.  Digital movies and TV shows are available from various digital retailers including, iTunes, Google Play, Vudu, and others.