When I was younger I was so excited to get home and watch ANIMANIACS .  It was always one of my favorite. 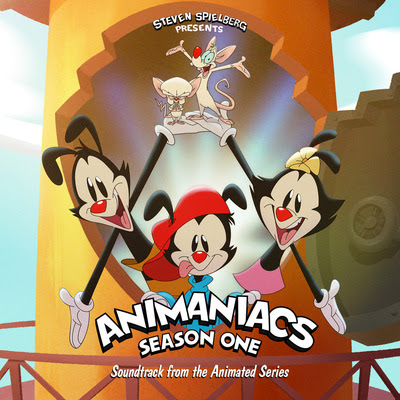 LISTEN TO THE SOUNDTRACK: HERE
WATCH  THE MAIN TITLE TRACK: HERE
August 13th Los Angeles, CA – WaterTower Music has today released the Animaniacs Season 1 (Soundtrack from the Animated Series), featuring the music from the brand-new version of the iconic family-friendly cartoon franchise Animaniacs. Hulu, Amblin Television and Warner Bros. Animation proudly announced the series which saw its long-awaited return on Hulu late last year through 13 brand-new episodes, twenty-two years after the final episode of the original series had aired. Steven Spielberg returned as executive producer of the series, with Sam Register, President, Warner Bros. Animation and Warner Digital Series, and Amblin Television Co-Presidents Justin Falvey and Darryl Frank also serving as executive producers.
The Animaniacs Season 1 (Soundtrack from the Animated Series) features music performed in the show by the Animaniacs.
The series marked the first Hulu Original Series for families.  The original Animaniacs made its television debut in 1993 and went on to become one of the most popular animated series for children. Since its premiere, the series has launched spin-offs and characters including Pinky and the Brain and has set the record for most Daytime Emmy Awards in the field of Outstanding Achievement in Music Direction and Composition for any animated series, winning three times.
ANIMANIACS is a smart update to the classic series.  The producers and artists went through a rigorous process to update the character designs and establish a visual style for their world that feels fresh and familiar at the same time.  The show is a comforting dose of nostalgia for fans of the original series with the return of  Pinky and the Brain, and other fan-favorite characters with the original voice cast. The show is a wonderful opportunity for adults and parents who were fans of the show when they were young to introduce these beloved characters to their kids.
In addition to the visual aspect of the series, the intuitive humor and sophisticated social commentary of the show retains that of the original series,  thoughtfully infuse it with modern and topical sensibilities. The music was also given a thoughtful update. For the original and soon-to-be classic musical numbers, the producers played around with current music genres as well like KPOP and EDM.
Season Two of Animaniacs debuts on Hulu on November 5.
TRACKLISTING
1. Main Title (Animaniacs)
2. Pinky & The Brain
3. Reboot It
4. Be Like Me
5. The Cutening
6. Limbs Fall Off
7. Banana Hammock
8. Bonding
9. The Catch-Up Song
10. Lakes Are Fun
11. Suffragette
12. I’m Gonna Eat’cha
13. Rap Battle, Pt. 1
14. Rap Battle, Pt. 2
15. Main Title (Anima-Nyet)
16. Alien Chorus
17. FLOTUS, FLOTUS, What Do You Know About Us?
18. A-Zit
ABOUT WATERTOWER MUSIC
WaterTower Music, the in-house label for the WarnerMedia companies, releases recorded music as rich and diverse as the companies themselves. It has been the soundtrack home to many of the world’s most iconic films, television shows, and games since 2001.
Share on FacebookShare on Twitter