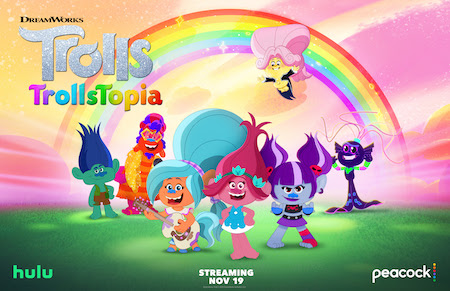 Yaa the Trolls are back and we are ready to sign and dance with them in their new series.  We could all use a little fun and love right now and the Trolls are bringing that fun to us.

THE ADORABLE TROLLS RETURN WITH THE NEW HAIR-RAISING

Inspired by the beloved DreamWorks Animation films, TrollsTopia is the next chapter in the hair-raising adventures of the trolls. Now that Poppy knows there are other musical trolls scattered throughout the forest, she bottles up her endless positivity and invites delegates from every troll tribe in the forest to live together in harmony in a grand experiment she calls TrollsTopia! From DreamWorks Animation and Emmy-nominated executive producer, Matthew Beans (Trolls: The Beat Goes On!), TrollsTopia brings nonstop fun and hugs to Peacock and Hulu November 19.

The series features an all-star cast of Skylar Astin (Pitch Perfect) as “Branch,” Amanda Leighton (The Fosters, This is Us) as “Poppy,” Kenan Thompson (Saturday Night Live) as “Tiny Diamond,” Megan Hilty (Smash) as “Holly Darlin’,”David Flynn (Undateable) as “Biggie,” Ron Funches (Undateable) as “Cooper,” Jeanine Mason (Grey’s Anatomy, Roswell) as “Minuet,” Kat Graham (The Vampire Diaries; Rise of the Teenage Mutant Ninja Turtles) as “R” and “B,” Kevin Michael Richardson (Trolls World Tour, American Dad) as “Smidge” among others.TrollsTopia also takes the dance party to the next level with an all-new original soundtrack by Alana D (Trolls: The Beat Goes On!) and Grammy-winning composer, Alex Geringas (Trolls: The Beat Goes On!).

DreamWorks Trollstopia launches on Peacock and Hulu November 19. Check out the trailer below!