Enter to win a copy below! Also, check out the fun snack idea inspired by the show! Download the recipe today!

JOIN THE COOL KIDS AS THEY EMBARK ON EXTRAORDINARY SITUATIONS IN THE ORIGINAL ANIMATED SERIES
STAR TREK: PRODIGY: SEASON 1, VOLUME 1 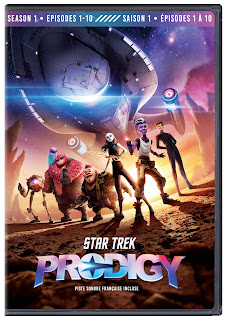 I have to be honest I have never been a Star Trek fan.  It was never my cup of tea, but I am a cartoon fan so I though Ill give it a try and I was surprised that I was sucked in.  This was a fun cartoon to watch and even if you are not a Star Trek fan I would suggest giving it a try.

LOS ANGELES– November 15, 2022 – Get ready to travel among the stars for some galactic adventures with an all-new crew in Star Trek: Prodigy: Season 1 Volume 1 Blu-ray™ and DVD! Join the cool kids as they come together as a team to navigate a cosmic collision, explore new planets, and find themselves along the way in ten adventurous episodes. Go beyond each episode with never-before-seen bonus content and exclusive cards featuring key art from the series!

Star Trek: Prodigy: Season 1 Volume 1 synopsis:
Star Trek: Prodigy follows a motley crew of young aliens who must figure out how to work together while navigating a greater galaxy, in search of a better future. These six young outcasts know nothing about the ship they have commandeered a first in the history of the Star Trek franchise but over the course of their adventures together, they will each be introduced to Starfleet and the ideals it represents.

About Nickelodeon
Nickelodeon, now in its 43rd year, is the number-one entertainment brand for kids. It has built a diverse, global business by putting kids first in everything it does. The brand includes television programming and production in the United States and around the world, plus consumer products, digital, location-based experiences, publishing and feature films. For more information or artwork, visit http://www.nickpress.com. Nickelodeon and all related titles, characters and logos are trademarks of ViacomCBS Inc. (Nasdaq: VIACA, VIAC).

Let’s have some fun!

Ready to rock your taste buds out of this world? Check out this scrumptious recipe for Galaxy Cake Pops inspired by Star Trek: Prodigy: Season 1 Volume 1, available now on DVD! Click the link to join the fun: https://bit.ly/ProdigyGalaxyCakePopRecipe 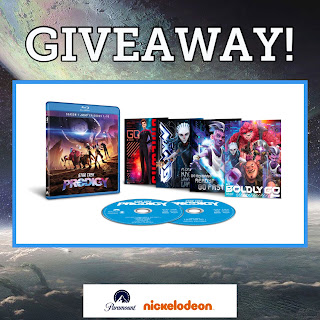 Two winners will receive a copy of Star Trek: Prodigy: Season 1 Volume 1 (RV $17.99) Open to US 18 and older.
a Rafflecopter giveaway

All entries will be verified—only one entrant per mailing address per giveaway. Any person who has won a prize (or whose household has won a prize) in any promotion sponsored by the Sponsor in the past thirty (30) days before this contest start date is not eligible to win a prize in this contest. Entrants who have created social accounts purely to enter Competitions or Sweepstakes will not be eligible to win. All social accounts used must be public.

The winner will be chosen randomly and contacted via email. A reply to the winning email is required within 48 hours before a new winner is chosen. Void were prohibited by law. One person entering per household, please. Prize will be shipped by sponsor. Chatty Patty’s Place and Tabbys Pantry are not responsible for lost or misdirected prizes.