We got the Digital Download free in exchange for an honest review all opinions are our own. 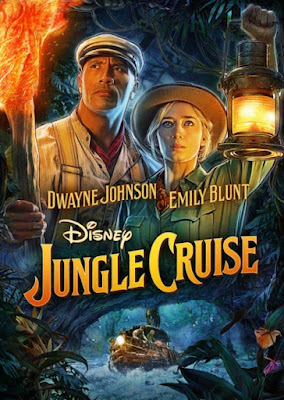 OMG all when this movie was over I just wanted more. Hubby even said that this movie was made for me.  I love the humor in this one the jokes that he tells are right up my alley and he tells them the whole way threw.  It also sends a few twists and curves that makes the movie so excited.  I did not hear a lot about this one before it was released but it looked great.
Most of us know about Disney Jungle Cruise.  I believe its in Adventure land and yes it is always and adventure.  This movie was perfect.  We start off with Lily and McGregor a brother and sister who want to explore the Jungle for the Moon tears.  Of course no one takes them seriously and they decide to take what they need and go on their own.  McGregor goes along to support his sister even though the Jungle is not his cup of tea.  When they meet Frank they soon learn not to believe anything he says, but he is funny and comes in handy at times.    The adventure takes them threw the jungle where they meet some colorful people and learn to trust each other.
Anyone who has been to Disney and has been weighting to hear this story for a long time.  They did it perfect.  I was truly impressed with the entire movie and have watched it 4 times already.

● Jungle Cruise Expedition Mode – Climb aboard a ramshackle tramp steamer (or your own couch) to learn fun facts, discover Easter eggs and catch some pop-up trivia throughout the movie.
● It’s A Jungle Out There: Making Jungle Cruise – Director Jaume Collet-Serra, the cast and crew discuss the importance of the film’s elements, from casting to makeup to the use of an ancient indigenous language, in creating the world that honors one of Disneyland’s most beloved rides.
● Dwayne And Emily: Undoubtedly Funny – Go on-set with the two stars, whose new-found friendship helped them project a natural onscreen chemistry. Although their characters challenge each other throughout the film, the actors make each other laugh. A lot!
● Creating The Amazon – Explore the cinematic artistry involved in creating the world of Jungle Cruise, including how Frank’s boat coursed “dangerous” water in a tank in Atlanta, how a town was built in Kauai, and how a ferocious jaguar came to life, among other amazing effects.
● Once A Skip, Always A Skip – Join a panel of “Skippers” at the Disneyland Resort as they reminisce about the rewards, challenges and surprises they’ve experienced while helming the world-famous Jungle Cruise attraction, and hear their advice to aspiring skippers everywhere!
● Outtakes – Step behind the scenes of the production to catch the cast in a series of flubs, falls, foibles — and a whole lot of laughter.
● Deleted Scenes
○ MacGregor Drives The Boat
○ MacGregor Water Skis
○ Joachim And Nilo On The Dock
○ Frank Talks To Proxima & Lily’s Nightmares
○ Sub Gets Stuck
○ Proxima Surprises MacGregor
○ Frank Gets The Cold Shoulder
○ Trader Sam And Lily Walk In The Jungle
○ MacGregor And Trader Sam Say Goodbye
○ Frank Makes Tea For Lily
○ The Backside Of Water