Little guy is going to be so excited. The new DreamWorks Captain Underpants Epic Choice-O-Rama on Netflix is going to be a awesome day for him.  He counts down till the new ones come out. 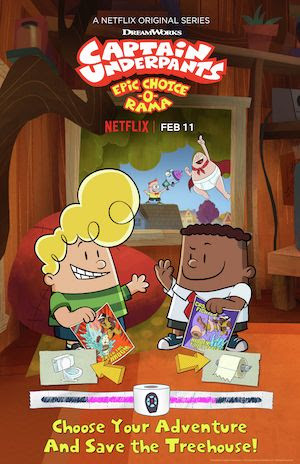 Choose your own adventure exclusively on Netflix February 11

When Principal Krupp has had it with George and Harold’s comics, he threatens to destroy their treehouse once and for all. George and Harold will need to hatch a plan to buy the land before Krupp does, and they’ll need your help to do it in this all new interactive Choice-O-Rama special! With no shortage of imagination and mischief at hand, you’ll be along for every wild twist and turn in George and Harold’s plot to stop Krupp from tearing down their treehouse. Choose fast and choose wisely, as the fate of creativity and comics is literally in your hands!

Based on the epic novels by Dav Pilkey (over 80 million copies in print!), DreamWorks Captain Underpants Epic Choice-O-Rama​ interactive special launches on Netflix February 11. Check out the trailer below!