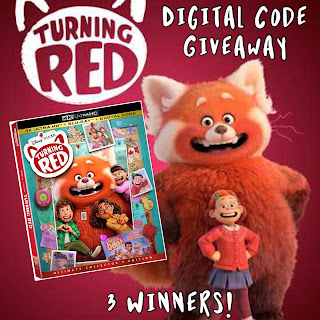 LOS ANGELES, CA (April 11, 2022) – Disney and Pixar’s Turning Red debuts on all major digital platforms April 26 and on 4K Ultra HD, Blu-ray and DVD on May 3, just in time for Mother’s Day. Pixar fans can transport back to the early aughts and experience all the warm and fuzzy red panda Mei-hem with never-before-seen bonus material including seven deleted scenes, three featurettes and audio commentary with Director Domee Shi. Turning Red is also streaming on Disney+.

In Disney and Pixar’s Turning Red, confident, dorky 13-year-old Mei must balance being a dutiful daughter with the chaos of adolescence. Her slightly overbearing mom is never far from her daughter. And, as if changes to Mei’s interests, relationships and body aren’t enough, whenever she gets too excited, she “poofs” into a giant red panda!

Three winners will each receive a Digital Code for Disney and Pixar’s Turning Red (RV $20). Open to U.S. residents of the 48 contiguous United States. You must be 18 years old to enter to win. This giveaway ends at 11:59 PM EST on 4.27.22. See below for terms and conditions.

The winner will be chosen randomly through Sweep Widget and contacted via email. A reply to the winning email is required within 48 hours before a new winner is chosen. Void where prohibited by law. One person entering per household, please. Tabby’s Pantry, Disney Insider Tips, The Review Wire, and Chatty Patty’s Place is not responsible for the shipment of the prize.