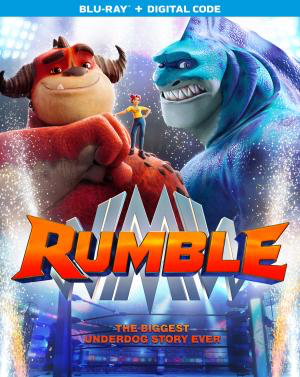 Buy it on Digital August 30, 2022 with Behind-the-Scenes Bonus Content!*

Based on the popular graphic novel “Monster on the Hill” by Rob Harrell, RUMBLE is a unique, massively entertaining movie set in a world where monster wrestling is a global sport and superstar athletes are larger than life.  The hilarious animated comedy features the voice talents of Will Arnett, Geraldine Viswanathan, and Terry Crews, as well as real-life NBA All-Star Charles Barkley, and WWE professional wrestlers Joe “Roman Reigns” Anoai and Becky Lynch.

The Digital* and Blu-ray releases include the bonus content detailed below:

The DVD includes the feature film in standard definition.

In a world where monster wrestling is a global sport, teenage Winnie (Geraldine Viswanathan) teams up with a loveable underdog monster (Will Arnett) in hopes of training him to be a champion.  The duo learns the value of moving to your own groove and paving your own unique path to success.

In Association with WWE STUDIOS 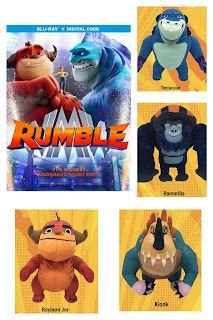 The winner will be chosen randomly through Rafflecopter and contacted via email. A reply to the winning email is required within 48 hours before a new winner is chosen. Void where prohibited by law. One person entering per household, please. Chatty Patty’s Place, Tabby’s Pantry, and The Review Wire are not responsible for the shipment of the prize.  Ends 9.5.22