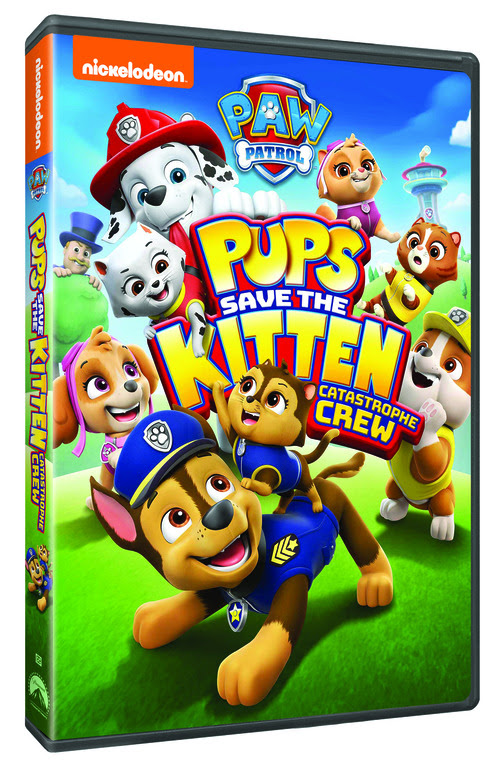 LOS ANGELES–August 16, 2021–Mayor Humdinger and his kittens are causing all kinds of mayhem in Adventure Bay and only the PAW Patrol can save the day in the brand-new DVD release, PAW Patrol: Pups Save the Kitten Catastrophe Crew! Available on September 21, 2021, this DVD includes the best episodes featuring Mayor Humdinger and his kittens Catastrophe Crew from the hit preschool series PAW Patrol, airing on Nickelodeon and produced by Spin Master Entertainment. There’s no time for kitten around as the PAW Patrol tries to win the Spotless Town award, rescues missing kittens, saves Mayor Humdinger when one of his schemes goes awry and more!

PAW Patrol: Pups Save the Kitten Catastrophe Crew synopsis: Meow! The Kitten Catastrophe Crew is taking over! Mayor Humdinger and the feline troublemakers are causing all kinds of mayhem in Adventure Bay. First, the pups must clean up the kittens’ mess in order to win the Spotless Town Award. Then Farmer Al’s sheep run away and the kittens go missing! Finally, join the pups as they save the cat show and so much more!

About Spin Master
Spin Master Corp. (TSX:TOY) is a leading global children’s entertainment company creating exceptional play experiences through a diverse portfolio of innovative toys, entertainment franchises and digital games. Spin Master is best known for award-winning brands PAW Patrol®, Bakugan®, Kinetic Sand®, Air Hogs®, Hatchimals®, Rubik’s Cube® and GUND®, and is the toy licensee for other popular properties. Spin Master Entertainment creates and produces compelling multiplatform content, stories and endearing characters through its in-house studio and partnerships with outside creators, including the preschool success PAW Patrol and nine other original shows along with multiple short-form series, which are distributed in more than 190 countries. The Company has an established digital presence anchored by the Toca Boca® and Sago Mini® brands, which combined have more than 50 million monthly active users. With close to 2,000 employees in 28 offices globally, Spin Master distributes products in more than 100 countries. For more information visit spinmaster.com or follow on Instagram, Facebook and Twitter @spinmaster.

About Nickelodeon
Nickelodeon, now in its 42nd year, is the number-one entertainment brand for kids. It has built a diverse, global business by putting kids first in everything it does. The brand includes television programming and production in the United States and around the world, plus consumer products, digital, location based experiences, publishing and feature films. For more information or artwork, visit http://www.nickpress.com. Nickelodeon and all related titles, characters and logos are trademarks of ViacomCBS Inc. (Nasdaq: VIACA, VIAC). 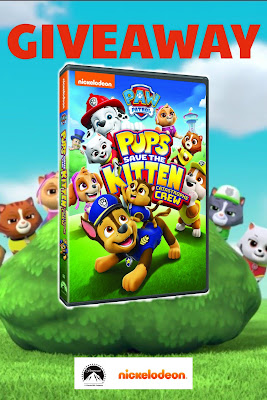 Two winners will each receive  PAW Patrol: Pups Save the Kitten Catastrophe Crew (RV $10.99). See below for terms and conditions. Open to U.S. residents of the 48 contiguous United States. You must be 18 years old to enter to win. This giveaway ends at 11:59 PM EST on 10.1.21All entries will be verified—only one entrant per mailing address per giveaway. If you have won the same prize on another blog, you will not be eligible to win it again. Any person who has won an award (or whose household has won a prize) in any promotion sponsored by the Sponsor in the thirty (30) days before this contest start date is not eligible to win a prize in this contest. Entrants who have created social accounts purely to enter Competitions or Sweepstakes will not be eligible to win. All social accounts used must be public. The winner will be chosen randomly through Rafflecopter and contacted via email. A reply to the winning email is required within 48 hours before a new winner is chosen. Void where prohibited by law. One person entering per household, please. Chatty Patty’s Place and Tabbys Pantry are not responsible for the shipment of the prize.
Share on FacebookShare on Twitter