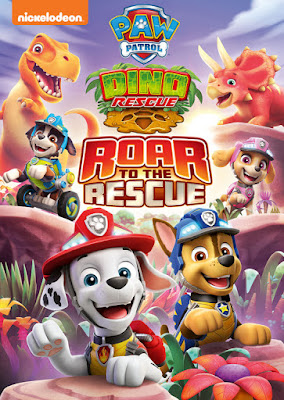 LOS ANGELES–February 16, 2021–Get ready to return to the Dino Wilds for roaring rescues in the all-new DVD release, PAW Patrol: Dino Rescue Roar to the Rescue. Available on March 23, 2021, this DVD features the remaining episodes of the highly popular Dino Rescue story arc from the hit preschool series PAW Patrol, airing on Nickelodeon and produced by Spin Master Entertainment, as well as six Dino Rescue original shorts. As the PAW Patrol reunite with their prehistoric pals, they’ll help a runaway Brachiosaurus, perform some dino-dentistry, stop a pie-clone and more. PAW Patrol: Dino Rescue Roar to the Rescue will be available on DVD from Paramount Home Entertainment and Nickelodeon Home Entertainment on March 23, 2021, for the suggested retail price of $10.99.

About Spin Master
Spin Master Corp. (TSX:TOY) is a leading global children’s entertainment company creating exceptional play experiences through a diverse portfolio of innovative toys, entertainment franchises and digital games. Spin Master is best known for award-winning brands PAW Patrol®, Bakugan®, Kinetic Sand®, Air Hogs®, Hatchimals®, Rubik’s Cube® and GUND®, and is the toy licensee for other popular properties.  Spin Master Entertainment creates and produces compelling multiplatform content, stories and endearing characters through its in-house studio and partnerships with outside creators, including the preschool success PAW Patrol and nine other original shows along with multiple short-form series, which are distributed in more than 190 countries. The Company has an established digital presence anchored by the Toca Boca® and Sago Mini® brands, which combined have more than 30 million monthly active users. With close to 2,000 employees in 28 offices globally, Spin Master distributes products in more than 100 countries. For more information visit spinmaster.com or follow on Instagram, Facebook and Twitter @spinmaster.

All entries will be verified—only one entrant per mailing address per giveaway. If you have won the same prize on another blog, you will not be eligible to win it again. Any person who has won a prize (or whose household has won a prize) in any promotion sponsored by the Sponsor in the past thirty (30) days before this contest start date is not eligible to win a prize in this contest. Entrants who have created social accounts purely for the purpose of entering Competitions or Sweepstakes will not be eligible to win. All social accounts used must be public.

The winner will be chosen randomly through Rafflecopter and contacted via email. A reply to the winning email is required within 48 hours before a new winner is chosen. Void where prohibited by law. One person entering per household, please. Chatty Patty’s Place and Tabby’s Pantry are not responsible for shipment of prize.