We got the Digital Download free in exchange for an honest post.  All opinions are our own. 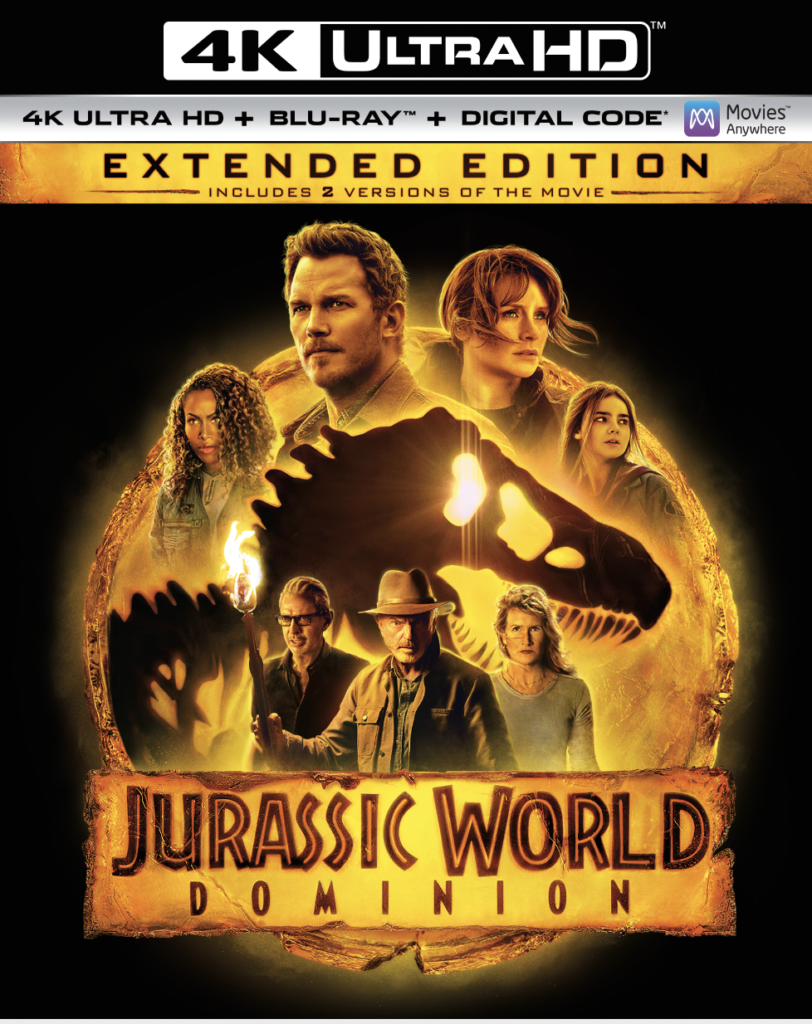 I have been waiting so long for the new Jurassic World movie to come out.  When I saw that they were brining back the old school actors and the new ones that made me even more excited.  I now a lot of people were excited to see the new Dinos and they had a few new ones in this one.  I was excited to see Blue and her baby Delta.  I love how they mix in the movies and of course Camp Cretaceous with the hidden Easter eggs.   I don’t know about what others were saying I loved this movie. Plenty of new Dinos, Plenty of action and twists and turns.  I have already watched it a few times and every time I notice something I missed on the first watch.

I love that we get to see how each of them have grown from the years. New family’s were formed.  The world is not what it used to be and everyone has to learn to adjust.

Universal City, California, August 9, 2022 – Bring home JURASSIC WORLD DOMINION boasting 14 minutes of never-before-seen footage, an alternate opening, more dinosaurs and more action on Digital, 4K Ultra HD, and Blu-ray™ on August 16th, 2022 from Universal Pictures Home Entertainment. Having generated over $950 million in global ticket sales, the summer’s colossal adventure from Amblin Entertainment and Universal Pictures topped the box-office charts in 72 markets around the world release weekend and broke franchise records in 16, earning an “A-” CinemaScore. In addition to the Extended cut, this exclusive special edition includes captivating behind-the-scenes content chronicling the making of the movie from beginning to end, the original short film Battle at Big Rock, and much more, for the perfect movie night at home.

Two worlds collide as the epic saga that began with Jurassic Park comes to a grand conclusion in JURASSIC WORLD DOMINION. Directed by Colin Trevorrow and executive-produced by Steven Spielberg, the director of the first two Jurassic Park films, JURASSIC WORLD DOMINION takes place four years after Isla Nublar’s destruction when dinosaurs roam the Earth again. Facing the cataclysmic consequences of a planet once again dominated by prehistoric predators, two generations of Jurassic heroes unite as doctors Ellie Sattler (Laura Dern), Ian Malcolm (Jeff Goldblum) and Alan Grant (Sam Neill) return to join Owen Grady (Chris Pratt) and Claire Dearing (Bryce Dallas Howard) for an incredible adventure that will determine the destiny of humans and dinosaurs once and for all.

With the purchase of JURASSIC WORLD DOMINION EXTENDED EDITION on digital or disc, fans are eligible to earn points towards digital movies via the Universal All-Access Rewards program. Members can redeem their points for digital movies, swag and more!  For registration and details please visit www.MyUniversalRewards.com.

The winner will be chosen randomly through Rafflecopter and contacted via email. A reply to the winning email is required within 48 hours before a new winner is chosen. Void where prohibited by law. One person entering per household, please. Chatty Patty’s Place, Tabby’s Pantry, and The Review Wire are not responsible for the shipment of the prize