We got Horizon Line free in exchange for an honest review all opinions are our own. 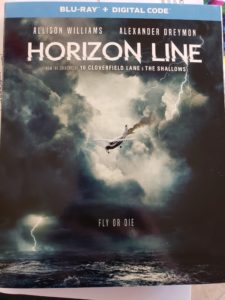 We start off with what we normally see as a love story.  Girl is moving from an island paradise and leaving her man behind to follow her job.  A year later she comes back and of course he is not only still there, but they are heading to the same wedding.  When they both miss their ride they catch a ride with a friend on a small plane.

That’s when everything goes wrong. The pilot has a heart attack and they are about to hit a storm.  Sara has had a few lessons in the past, but nothing to prepare her to fly back in a storm and land.  Now Sara and Jackson are lost, running out of gas and have to find a way to survive and land.

I liked this movie.  It had love, action a few OMG scenes and when it was over I had no idea it had already been and hour and a half. In my book if I loose track of time it’s an awesome movie.  If you are looking for a great date night movie this has something for everyone.

SYNOPSIS:  Former couple Sara (Allison Williams; Get Out, “A Series of Unfortunate Events”) and Jackson (Alexander Dreymon; “The Last Kingdom,” “American Horror Story”) board a single-engine plane for a routine and casual flight to their friend’s tropical island wedding. However, within minutes of takeoff, their pilot suffers a fatal heart attack, leaving them with no idea where they are, and no clue how to land the plane. With nothing but miles of ocean and sky in every direction, and a terrifying storm that’s about to envelop them, Sara and Jackson have only one shot — and there’s no going back.

HORIZON LINE will be available on Blu-rayTM, DVD and Digital.