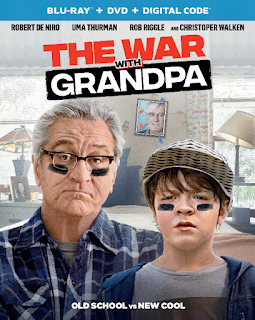 IT’S THE WISE GUY VS. THE PINT SIZE WHEN ROBERT DE NIRO GEARS UP FOR AN EPIC PRANK BATTLE IN THIS HEARTFELT FAMILY COMEDY
NOW AVAILABLE TO OWN FOR THE FIRST TIME 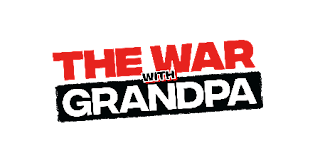 Universal City, California, December 1, 2020– Ring in the holiday season and get ready to laugh-out-loud with an all-out prank  battle the whole family can enjoy, in the hilarious comedy, THE WAR WITH GRANDPA, now available to own for the first time on Digital on December 15, 2020 and on Blu-ray™, DVD and On Demand on December 22, 2020 from Universal Pictures Home Entertainment. Based on Robert Kimmel Smith’s multi-award-winning beloved children’s book of the same name, the film follows a series of escalating shenanigans that ensue when a grandfather (Academy Award®winner Robert De Niro, The Irishman, Meet the Parents franchise) moves in with his daughter, forcing his grandson (Oakes Fegley, The Goldfinch, This Is Where I Leave You) to begrudgingly give up his bedroom. Packed with heart and hysterical hijinks from start to finish, THE WAR WITH GRANDPA is the perfect “family-friendly comedy” (Pete Hammond, Deadline) everyone can enjoy during the holiday and beyond.

Sixth-grader Peter (Fegley) is pretty much your average kid—he likes gaming, hanging with his friends and his beloved pair of Air Jordans. But when his recently widowed grandfather Ed (De Niro) moves in with Peter’s family, the boy is forced to give up his most prized possession of all, his bedroom. Unwilling to let such an injustice stand, Peter devises a series of increasingly elaborate pranks to drive out the interloper, but Grandpa Ed won’t go without a fight. Soon, the friendly combatants are engaged in an all-out war with side-splitting consequences.

With the purchase of THE WAR WITH GRANDPA on disc or digital, fans are eligible to earn points towards special rewards via the Universal All-Access Rewards program. Members can redeem their points for digital movies, signed collectables, box sets, win exclusive prizes and more! For FREE registration and details please visit www.MyUniversalRewards.com.

THE WAR WITH GRANDPAwill be available on Blu-rayTM, DVD and Digital.

Ring in the holiday season with these festive Marble Cake Pops! THE WAR WITH GRANDPA is available now on Digital and on Blu-ray and DVD December 22nd! #WarWithGrandpa http://bit.ly/WarWithGrandpaCakePops

THE WAR WITH GRANDPA Movie

All entries will be verified—only one entrant per mailing address per giveaway. If you have won the same prize on another blog, you will not be eligible to win it again. Any person who has won a prize (or whose household has won a prize) in any promotion sponsored by the Sponsor in the past thirty (30) days before this contest start date is not eligible to win a prize in this contest. Entrants who have created social accounts purely to enter Competitions or Sweepstakes will not be eligible to win. All social accounts used must be public.

The winner will be chosen randomly and contacted via email. A reply to the winning email is required within 48 hours before a new winner is chosen. Void where prohibited by law. One person entering per household, please. Chatty Patty’s Place and Tabby’s Pantry are not responsible for the shipment of the prizes.