THE BLUE CREW IS BACK WITH BRAND NEW CHARACTERS & ADVENTURES! 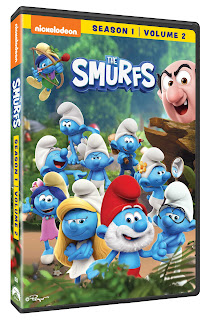 Who grew up loving the Smurfs?  I remember them well! My little sister was so obsessed with this show.  We use to watch it every Saturday.  My favorites were Smurfette and Jokey.  I was so excited to see the Season 1 Volume 2 release.  Now we can watch all of the awesome episodes we loved as kids.
Enter below to win this DVD

LOS ANGELES– September 23, 2022 – Smurf village gets more exciting in the all-new DVD The Smurfs: Season 1, Volume 2, featuring new girl Smurfs; Willow, Blossom, Storm, and Lily! Join the Smurfs as they keep their village safe from the wizard Gargamel, accidentally turn themselves into babies, and more!

The Smurfs: Season 1, Volume 2 synopsis:
The Smurfs have a new home on Nickelodeon! Join these beloved blue characters as they go on ALL-NEW adventures that push the charm, absurdity, and humor of the original series to even greater heights. Smurf we go! This volume contains the second 9 episodes of season one in a 1-disc set.

About Peyo, LAFIG Belgium/IMPS (International Merchandising Promotions & Services)
IMPS, together with LAFIG Belgium, are the official licensors of the little, blue-skinned characters ‘The Smurfs.’ Over the years, IMPS has worked in close collaboration with its agents worldwide to develop successful licensed merchandising, retail and co-branded promotions, publishing activities, broadcasting deals, theme parks, live shows and family entertainment centers that have secured the everlasting success of the Smurfs.  IMPS is run by Véronique Culliford, the daughter of Pierre Culliford, the creator of the Smurfs, who is better known under his pseudonym Peyo. Véronique has run IMPS since 1984 and controls with LAFIG Belgium the rights to the Smurfs characters and the Smurfs licensing worldwide.

All entries will be verified—only one entrant per mailing address per giveaway. Any person who has won a prize (or whose household has won a prize) in any promotion sponsored by the Sponsor in the past thirty (30) days before this contest start date is not eligible to win a prize in this contest. If you have won the same prize on another blog, you will not be eligible to win it again. Entrants who have created social accounts purely to enter Competitions or Sweepstakes will not be eligible to win. All social accounts used must be public.The winner will be chosen randomly through Rafflecopter and contacted via email. A reply to the winning email is required within 48 hours before a new winner is chosen. Void where prohibited by law. One person entering per household, please. Chatty Patty’s Place, Tabby’s Pantry, and The Review Wire are not responsible for the shipment of the prize. Ends