PAW PATROL AND THE CAT PACK JOIN FORCES IN THIS ALL-NEW DVD! 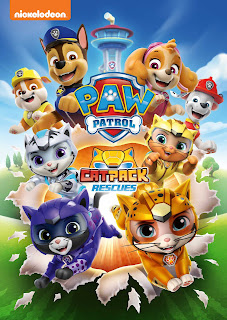 LOS ANGELES– August 9, 2022 – – PAWPatrol teams up with the Cat Pack in an all-new PAW Patrol DVD, PAW Patrol: Cat PackRescues. Join the little cats as they become big heroes in this action-packed adventure! PAW Patrol and the Cat Pack save runaway rockets, retrieve stolen artifacts, visit the jungle, and much more in this paw-some DVD.

Review:  The Paw Patrol are ready to take on Mayor Humdinger’s robot cat Meow Meow with the help of their heroic friends, the Cat Pack. They also work together on rescues.  This dvd has 7 episodes and 4 special Cat Pack short features. I love the Paw Patrol and I have to admit I’m a cat person.  I adore this Cat Pack and know you will too.

PAW Patrol: Cat Pack Rescues synopsis:
Dreaming of being as powerful and heroic as their feline idols the BIG CATS – lions, tigers, cheetahs, and jaguars - four brave kittens are out to show that little cats can be big heroes! Kittened out with awesome transforming vehicles and power suits, the Cat Pack are ready to team up with the pups to save the day.

The winner will be chosen randomly through Rafflecopter and contacted via email. A reply to the winning email is required within 48 hours before a new winner is chosen. Void where prohibited by law. One person entering per household, please. Chatty Patty’s Place, Tabby’s Pantry, and The Review Wire are not responsible for the shipment of the prize. Ends 9.16