We got Free Guy on Digital free in exchange for an honest review.  All opinions are our own. 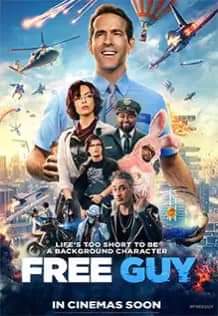 There is nothing better then a movie night with my family.  I had seen the trailer for Free Guy and new it looked awesome, but I had no idea how much I was going to love it. In todays world a lot of people live in an online world.  This movie brings the real world and the online together in one of the funniest movies of the year.  Of course it was going to be funny it has Ryan Reynolds.   I did not realize that this is not only a great comedy , but it turns out it is also a awesome love story. Is the one you are meant to be with still out there?

Guy works every day at a bank where the same thing happens over and over again. Then Guy finally finds the girl of his dreams. He will have to change his entire life, and discover a few big things about his life, before he can get the girl.  When she tells him the truth about who he is he will have to come to terms with it before he can go any farther.  She needs his help not only with an online mission, but also a real life mission. As the world watches his life, he begins to get ahold this world he only knew a part of .  Now he’s got the whole world cheering for him to save not only the girl, but his life and his world.

A bank teller (Ryan Reynolds) who discovers he is actually a background player in an open-world video game decides to become the hero of his own story – one he rewrites himself. Now, in a world where there are no limits, he is determined to be the guy who saves his world his way… before it’s too late.