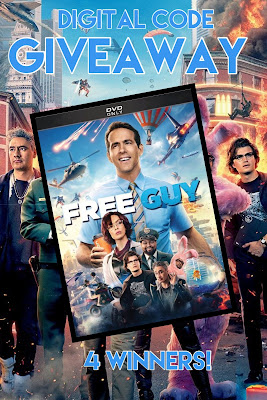 In celebration of Free Guy’s released digital platforms, I’ve teamed up with Tabby’s Pantry and The Review Wire to offer 4 Winners the chance to win a digital code for this must see movie!

A bank teller (Ryan Reynolds) who discovers he is actually a background player in an open-world video game decides to become the hero of his own story – one he rewrites himself. Now, in a world where there are no limits, he is determined to be the guy who saves his world his way… before it’s too late.

There is nothing better then a movie night with my family.  I had seen the trailer for Free Guy and new it looked awesome, but I had no idea how much I was going to love it. In todays world a lot of people live in an online world.  This movie brings the real world and the online together in one of the funniest movies of the year.  Of course it was going to be funny it has Ryan Reynolds.   I did not realize that this is not only a great comedy , but it turns out it is also a awesome love story. Is the one you are meant to be with still out there?

Guy works every day at a bank where the same thing happens over and over again. Then Guy finally finds the girl of his dreams. He will have to change his entire life, and discover a few big things about his life, before he can get the girl.  When she tells him the truth about who he is he will have to come to terms with it before he can go any farther.  She needs his help not only with an online mission, but also a real life mission. As the world watches his life, he begins to get ahold this world he only knew a part of .  Now he’s got the whole world cheering for him to save not only the girl, but his life and his world.

This movie is currently available on digital. 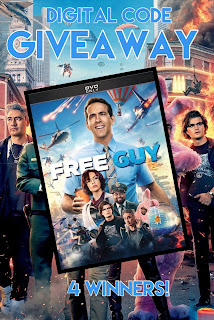 All entries will be verified—only one entrant per mailing address per giveaway. If you have won the same prize on another blog, you will not be eligible to win it again. Any person who has won an award (or whose household has won a prize) in any promotion sponsored by the Sponsor in the thirty (30) days before this contest start date is not eligible to win a prize in this contest. Entrants who have created social accounts purely to enter Competitions or Sweepstakes will not be eligible to win. All social accounts used must be public. The winner will be chosen randomly through Rafflecopter and contacted via email. A reply to the winning email is required within 48 hours before a new winner is chosen. Void where prohibited by law. One person entering per household, please. Chatty Patty’s Place, The Review Wire and Tabbys Pantry are not responsible for the shipment of the prize.