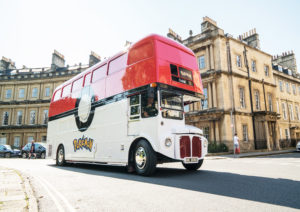 Today, The Pokémon Company International released the digital Galar Expedition Guide to mark the launch of a new five-part YouTube series in which fans can follow the Pokémon Bus around areas of the UK that inspired Galar, the region players explore in the Pokémon Sword and Pokémon Shield video games.
Alongside explorations of Galar’s locales, such as the Manchester-inspired Motostoke and the capital city of Wyndon, the printable guide is jam-packed with quizzes and games and is the perfect supplement for Trainers watching the new Pokémon Bus Tour: Explore Galar YouTube series. Pokémon fans will also find information on the Galar region’s history, background on Galarian buildings, and behind-the-scenes insight into the design of the map from the Pokémon Sword and Pokémon Shield video games.
The guide features stunning artwork of Galar’s expansive and diverse environments, allowing fans to discover Galar’s idyllic countryside, contemporary cities, thick forests, and craggy, snow-covered mountains. Trainers will be able to follow along with the weekly YouTube series using the Galar Expedition Guide, uncovering more secrets about the areas and Pokémon that can be found in the Galar region. 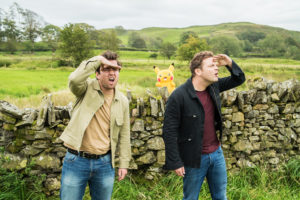 The first episode of Pokémon Bus Tour: Explore Galar launches on the Pokémon YouTube channel today. The series will see the hosts—popular children’s TV presenters Sam Nixon and Mark Rhodes—board the Pokémon Bus and embark on an epic journey around the UK to reveal the inspiration behind the exciting Galar region, developed by GAME FREAK™.
Along the way, Sam and Mark will meet various Pokémon Trainers, experts, and fans, including two of the world’s biggest gaming YouTube stars, DanTDM and Ali-A. Each episode will teach the hosts and fans more about the world of the Pokémon Sword and Pokémon Shield video games and the Pokémon Trading Card Game. Each episode will be packed with lots of fun and interesting facts about Pokémon, together with a special pop-up appearance by Pikachu as our adventurers search for the elusive Pokémon. The episodes also feature an exciting interactive challenge for Trainers at home.
Fans can keep up to date with all the latest Pokémon Bus Tour: Explore Galar news by following @PokemonNewsUK on social media and subscribing to the official Pokémon YouTube channel at YouTube.com/Pokemon.
#ExploreGalar
#PokemonBus
Share on FacebookShare on Twitter