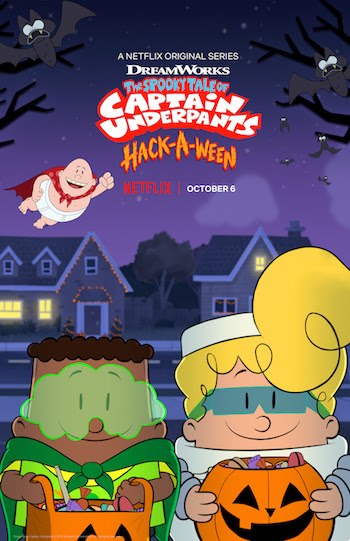 “Sneak or Snack” your way through the all-new Halloween special exclusively on Netflix!

Based on the EPIC novels of Dav Pilkey (over 80 million copies in print!) comes the Captain Underpants Halloween special, DreamWorks The Spooky Tales of Captain Underpants: Hack-A-Ween premiering on Netflix Tuesday, October 8th!

When mean Principal Krupp and evil boy-genius Melvin make Halloween illegal and institute“Hall-no-Ween,” George and Harold team up with their friends to hack their favorite holiday, creating Hack-A-Ween. The kids wear disguises instead of costumes, carve cabbages instead of pumpkins, and get snacks instead of candy. The hacked holiday is a huge hit, so when Krupp and Melvin make even more trouble, the kids realize that in order to really save Halloween they will have to negotiate with the enemy. DreamWorks The Spooky Tales of Captain Underpants: Hack-A-Ween tra-la-la’s its way to Netflix October 8.