We got the Digital code for Universal’s CANDYMAN free in exchange for an honest post.  All opinions are our own 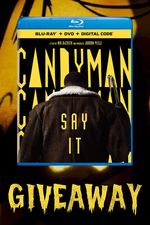 Like any other Horror lover we know about Candyman.  Don’t repeat his name or you are in trouble.  I have to admit unlike most other horror movie charters Candyman is one of the few I always felt bad for.  He was not a bad man , but was made the way he was by others.  If you are looking for an action packed movie that will have you jumping out of your seat this is the movie for you.

Dare to say his name. Oscar® winner Jordan Peele (Get Out, Us) and director Nia DaCosta (Little Woods, Disney’s upcoming film The Marvels) expand on the infamous Candyman legacy with “a new horror classic” (FOX TV) that is “smart, stylish, and scary as hell” (Danielle Ryan, /FILM). Certified Fresh on Rotten Tomatoes with a score of 84%, Metro Goldwyn Mayer’s (MGM) CANDYMAN is back and yours to own on Digital November 2, 2021 and on 4K Ultra HD, Blu-rayTM and DVD November 16, 2021 from Universal Pictures Home Entertainment. All versions come packed with over an hour of bonus features including a never-before-seen alternate ending, deleted and extended scenes as well as special featurettes taking viewers behind-the-scenes of the film and deeper into this complex and deeply resonant contemporary take on the bone-chilling urban legend.

For decades, the housing projects of Chicago’s Cabrini-Green were terrorized by a ghost story about a supernatural, hook-handed killer. In present day, a visual artist (Yahya Abdul-Mateen II; HBO’s “Watchmen,” Us, forthcoming Matrix Resurrections) begins to explore the macabre history of Candyman, not knowing it would unravel his sanity and unleash a terrifying wave of violence that puts him on a collision course with destiny.

One lucky winner will get their very own Candyman Blu-ray

One Winner  See below for terms and conditions. Open to U.S. residents of the 48 contiguous United States. You must be 18 years old to enter to win.
All entries will be verified—only one entrant per mailing address per giveaway. If you have won the same prize on another blog, you will not be eligible to win it again. Any person who has won an award (or whose household has won a prize) in any promotion sponsored by the Sponsor in the thirty (30) days before this contest start date is not eligible to win a prize in this contest. Entrants who have created social accounts purely to enter Competitions or Sweepstakes will not be eligible to win. All social accounts used must be public. The winner will be chosen randomly through Rafflecopter and contacted via email. A reply to the winning email is required within 48 hours before a new winner is chosen. Void where prohibited by law. One person entering per household, please. Chatty Patty’s Place and Tabbys Pantry are not responsible for the shipment of the prize. This giveaway ends at 11:59 PM EST on 11.16.21
Share on FacebookShare on Twitter