BLAZE AND THE MONSTER MACHINES ARE BACK TO THE RESCUE IN AN ALL-NEW DVD! 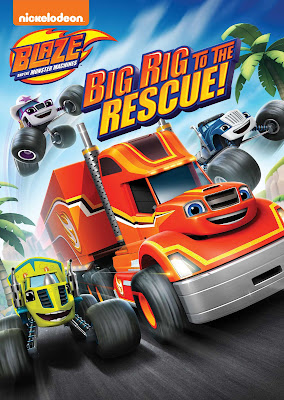 BLAZE AND THE MONSTER MACHINES: BIG RIG TO THE RESCUEAvailable on DVD October 4, 2022

I just love Big Rig.  He’s always ready to lend a helping hand and make sure he gets his deliveries where they need to be, on time.  This dvd has 3 fun filled episodes that kids will love.

Blaze And The Monster Machines: Big Rig To The Rescue episodes:

Blaze And The Monster Machines: Big Rig To The Rescue synopsis:
When a windstorm blows away the supplies for Stripes’ Animal Party, Blaze transforms into the one Monster Machine strong enough to haul it all back – a Big Rig! The Big Rig also kicks into gear when three big deliveries are needed all over Axle City and only one monster machine has the power to haul it! Then Big Rig Blazehelps a dolphin named Flippy travel cross country to reunite his family in the ocean. There’s nothing he can’t pull with that Big Rig Force!

About Nickelodeon
Nickelodeon, now in its 43rd year, is the number-one entertainment brand for kids. It has built a diverse, global business by putting kids first in everything it does. The brand includes television programming and production in the United States and around the world, plus consumer products, digital, location-based experiences, publishing and feature films. For more information or artwork, visit http://www.nickpress.com. Nickelodeon and all related titles, characters and logos are trademarks of ViacomCBS Inc. (Nasdaq: VIACA, VIAC).

One winner will receive Blaze And The Monster Machines: Big Rig To The Rescue.!  (RV $10.99)

The winner will be chosen randomly through Rafflecopter and contacted via email. A reply to the winning email is required within 48 hours before a new winner is chosen. Void where prohibited by law. One person entering per household, please. Chatty Patty’s Place, Tabby’s Pantry, and The Review Wire are not responsible for the shipment of the prize. Ends 10.10.22