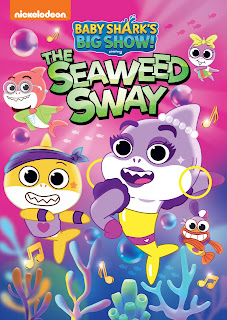 Follow Baby Shark and new characters as they create more smash hits in Baby Shark’s Big Show! The Seaweed Sway! featuring: Grammy Award®-winning* superstar Cardi B as Sharki B, the biggest rap icon in the seven seas; Offset, as Offshark; their daughter Kulture, as Toddler Shark; and John Michael Higgins, as Mayor Anchovy!

Baby Shark’s Big Show!: The Seaweed Sway synopsis:
Do the “Seaweed Sway” along with Baby Sharkand William when they meet the fin-credible rap icon Sharki B who created the dance craze! Next, Baby Shark bites off more than he can chew before his big dance party with Grandma Shark! Then, The Tentacools (Baby, William, and Vola) get caught up in the trappings of being rock starfishes and forget that they formed the band to have fun! It’s a dancing and singing extravaganza!

One winner will receive Baby Shark’s Big Show! The Seaweed Sway!  (RV $10.99)
All entries will be verified—only one entrant per mailing address per giveaway. Any person who has won a prize (or whose household has won a prize) in any promotion sponsored by the Sponsor in the past thirty (30) days before this contest start date is not eligible to win a prize in this contest. If you have won the same prize on another blog, you will not be eligible to win it again. Entrants who have created social accounts purely to enter Competitions or Sweepstakes will not be eligible to win. All social accounts used must be public.The winner will be chosen randomly through Rafflecopter and contacted via email. A reply to the winning email is required within 48 hours before a new winner is chosen. Void where prohibited by law. One person entering per household, please. Chatty Patty’s Place, Tabby’s Pantry, and The Review Wire are not responsible for the shipment of the prize. Ends 10.07.23
Share on FacebookShare on Twitter