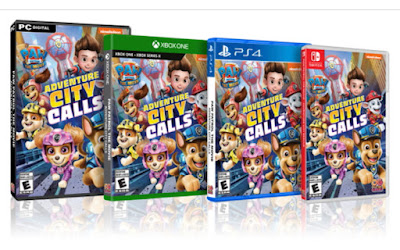 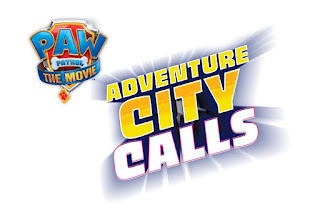 London, August 13, 2021 – The PAW Patrol are on a roll in their biggest rescue mission yet! Outright Games, the leading global publisher of family friendly interactive entertainment, in partnership with Nickelodeon, have today launched ‘PAW Patrol The MovieTM Adventure City Calls’, available on PlayStation®, Nintendo Switch™, Xbox and Steam priced at $39.99 USD.

Based on the franchise’s first full length feature film ‘PAW Patrol: The Movie’ releasing  August 20, 2021 from Spin Master Entertainment in association with Nickelodeon movies and Paramount Pictures, join the pups and their new pal Liberty in this brand new big city adventure.

The PAW Patrol’s latest mission sees them going head-to-head with Mayor Humdinger who is plotting to take over the buzzing metropolis of Adventure City. Only the pups can stop his selfish scheming and they need you to help them! Become your favorite member of the PAW Patrol including Chase, Skye and the newest member Liberty each with their own unique abilities and save the city in high-stakes rescue missions.

Next-level gadgets and vehicles bring the city to life and open up new exciting locations from the feature length movie. Enjoy minigames, like dancing to Pup Pup Boogie, discover a stash of pup treats so big, it’s guaranteed to keep Rubble happy, and unlock new rewards along the way! Play together in both solo and local co-op modes in this 3D platformer, allowing young gamers as well as older family members and friends to join the PAW Patrol for their biggest mission yet!

●      BE THE PUPS – Including Chase, Marshall, Skye, and new city pup Liberty

●      MISSION PAW – Save the day in amazing rescues and bonus missions

PAW Patrol is one of the largest global pre-school brands, with the #1 Pre-school show, topping charts since it aired in 2013. The global phenomenon reaches over 170 countries through the TV show, toys, video games, clothing lines, and even theme park rides. As children who love the PAW Patrol are growing up, so are their PAW Patrol pals and the adventures ahead of them with their first full-length feature film ‘PAW Patrol: The Movie’ coming to the big screen August 20, 2021.

Outright Games continues its longest standing and most impactful partnership alongside Nickelodeon with ‘PAW Patrol The MovieTM Adventure City Calls’ following the release of top selling games in the franchise including ‘PAW Patrol: On a Roll’ and ‘PAW Patrol Mighty Pups Save Adventure Bay’.

”We’re thrilled to bring the beloved PAW Patrol pups to the world of video games once again!” said Terry Malham, CEO of Outright Games. ”This is our third game made in partnership with our friends at Nickelodeon and we feel it’s at the next level, with action packed missions and a brand-new city for the whole family to enjoy together. We hope everyone enjoys playing the game as much as we did making it.”

Outright Games is a global video games publisher with a focus on quality family entertainment to a worldwide audience. Founded in 2016, Outright Games has established its place in the market delivering engaging interactive games of beloved entertainment licenses globally. Outright Games brings stories and characters to life with titles including favourites such as Jumanji: The Video Game with Sony Pictures, PAW Patrol: Mighty Pups Save Adventure Bay with Nickelodeon, Ben 10: Power Trip with Cartoon Network, and Dragons: Dawn of New Risers with NBC Universal. With an Outright Games title there will be fun for all the family to enjoy. For more information please visit: www.outrightgames.com

Spin Master Corp. (TSX:TOY) is a leading global children’s entertainment company creating exceptional play experiences through a diverse portfolio of innovative toys, entertainment franchises and digital games. Spin Master is best known for award-winning brands PAW Patrol®, Bakugan®, Kinetic Sand®, Air Hogs®, Hatchimals®, Rubik’s Cube® and GUND®, and is the toy licensee for other popular properties.  Spin Master Entertainment creates and produces compelling multiplatform content, stories and endearing characters through its in-house studio and partnerships with outside creators, including the preschool success PAW Patrol and nine other original shows along with multiple short-form series, which are distributed in more than 190 countries. The Company has an established digital games presence anchored by the Toca Boca® and Sago Mini® brands, which combined have more than 50 million monthly active users. With close to 2,000 employees in 28 offices globally, Spin Master distributes products in more than 100 countries. For more information visit spinmaster.com or follow on Instagram, Facebook and Twitter @spinmaster.

Drakhar Studio is a video game development studio for both mobile devices and Sony, Microsoft and Nintendo consoles. Founded in 2011 in Spain, Drakhar Studio started with small games for Android and Apple until in 2016 it launched its first game for consoles: Ginger Beyond The Crystal. Since then, Drakhar Studio has specialized in the development of video games for publishers and film and animation producers, standing out for its high level of quality, fun mechanics and special care in the artistic aspect.

Five winners will each receive a digital gaming system download game code for  ‘PAW Patrol The MovieTM  Adventure City Calls’  on PlayStation, Nintendo Switch, Xbox or PC Digital priced at $39.99 USD. See below for terms and conditions. Open to U.S. residents of the 48 contiguous United States. You must be 18 years old to enter to win. This giveaway ends at 11:59 PM EST on 8.31.21All entries will be verified—only one entrant per mailing address per giveaway. If you have won the same prize on another blog, you will not be eligible to win it again. Any person who has won an award (or whose household has won a prize) in any promotion sponsored by the Sponsor in the thirty (30) days before this contest start date is not eligible to win a prize in this contest. Entrants who have created social accounts purely to enter Competitions or Sweepstakes will not be eligible to win. All social accounts used must be public. The winner will be chosen randomly through Rafflecopter and contacted via email. A reply to the winning email is required within 48 hours before a new winner is chosen. Void where prohibited by law. One person entering per household, please. Chatty Patty’s Place and Tabbys Pantry are not responsible for the shipment of the prize.