Return to Las Vistas for the final showdown between the Brunch Bunch and Dr. Emilia 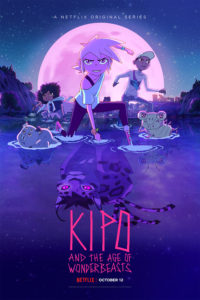 DreamWorks Kipo and The Age of Wonderbeasts will return to Netflix October 12 for its third and final season of the whimsical and action packed series.

After spending her entire life living in an underground burrow, a young girl named Kipo (Karen Fukuhara) is thrust into an adventure on the surface of a fantastical post-apocalyptic Earth. She joins a ragtag group of survivors as they embark on a journey through a vibrant wonderland where everything trying to kill them is downright adorable.

After dethroning Scarlemagne, Kipo and the Brunch Bunch face a more daunting foe: Dr. Emilia, who plots to eliminate mutekind to make the surface “safe” for humans. But Kipo has an optimistic vision of a world where mutes and humans get along with each other. To achieve that dream, she must lean on her friends and rise to a role she may not be ready for.

To mark the series conclusion, we have the final season trailer to share with you below! DreamWorks Kipo and the Age of Wonderbeasts returns to Netflix October 12.