DOCTOR STRANGE IN THE MULTIVERSE OF MADNESS 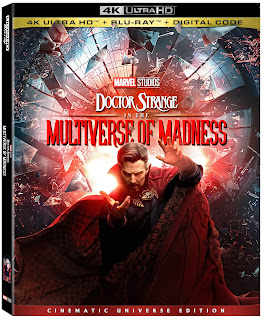 Film Synopsis
Journey into the unknown in Marvel Studios’ Doctor Strange in the Multiverse of Madness. When the MCU unlocks the Multiverse, Doctor Strange (Benedict Cumberbatch) must enlist help from old and new allies as he traverses mind-bending and dangerous alternate realities in order to confront a surprising adversary.

This movie is jam packed with action and adventure and many of your favorite characters and some new. There are tense moments and awesome battles in the Multiverse. I don’t watch too many superhero movies but I really liked this one.

Three winners will each receive Doctor Strange in the Multiverse of Madness Digital code ($19.99). Open to U.S. residents of the 48 contiguous United States. You must be 18 years old to enter to win. This giveaway ends at 11:59 PM EST on 7.4.22. See below for terms and conditions.

The winner will be chosen randomly through Sweep Widget and contacted via email. A reply to the winning email is required within 48 hours before a new winner is chosen. Void where prohibited by law. One person entering per household, please. Chatty Patty’s Place, Tabby’s Pantry, and The Review Wire are not responsible for the shipment of the prize.  Ends 7.4.22