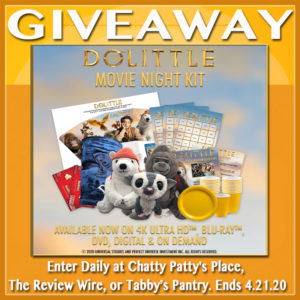 Robert Downey Jr. electrifies as the man who could talk to animals: DOLITTLE. After losing his wife, he hermits himself away behind the high wall of his manor but is forced to set sail on an epic adventure when the queen falls gravely ill. Helping Dolittle in search of a rare cure are his rambunctious animal friends—including Chee-Chee (Malek), an anxious, self-conscious gorilla; Dab-Dab (Octavia Spencer, The Help), an enthusiastic but bird-brained duck; the bickering duo of cynical, neurotic ostrich Plimpton (Kumail Nanjiani, The Big Sick, “Silicon Valley”) and chilly-but-chill polar bear Yoshi (Cena); as well as a headstrong parrot named Polynesia (Thompson). Catch incredible bonus content that you can only see on the 4K Ultra HD™, Blu-ray™, DVD, and Digital release showcasing the making of the film and insight to all the cast.

We have a first prize and a second prize winner. FIRST PRIZE includes: 3 plush characters from the film, a custom Bingo Activity game, themed recipe card for “Yoshi pops”, microwave popcorn, themed popcorn boxes, party supplies (plates, napkins, cups), Target gift-card to purchase add’l movie snacks, Voyages of Dolittle book, and a Dolittle branded blanket Dolittle dvd. SECOND PRIZE is a digital code to download the movie Dolittle. See below for terms and conditions. Open to U.S. residents of the 48 contiguous United States. You must be 18 years old to enter to win. This giveaway ends at 11:59 PM EST on 4.21.20

Please Note: The shipping warehouse has shut down during this time and a reopening date has not been given. However, digital codes are available soon after the giveaway ends. A physical product will be sent to the first place winner as soon as it is allowed.

All entries will be verified. Only one entrant per mailing address per giveaway. If you have won the same prize on another blog, you will not be eligible to win it again. Any person who has won a prize (or whose household has won a prize) in any promotion sponsored by Sponsor in the thirty (30) days before this contest start date is not eligible to win a prize in this contest. Entrants who have created social accounts purely for the purpose of entering Competitions or Sweepstakes will not be eligible to win. All social accounts used must be public.

The winner will be chosen randomly through Giveaway Tools and contacted via email. A reply to the winning email is required within 48 hours before a new winner is chosen. Void where prohibited by law. One person entering per household, please. The Review Wire, Chatty Patty’s Place, and Tabby’s Pantry are not responsible for shipment of prize.