OMG all I just got done with a Friends Marathon and this popped up.  I am so excited 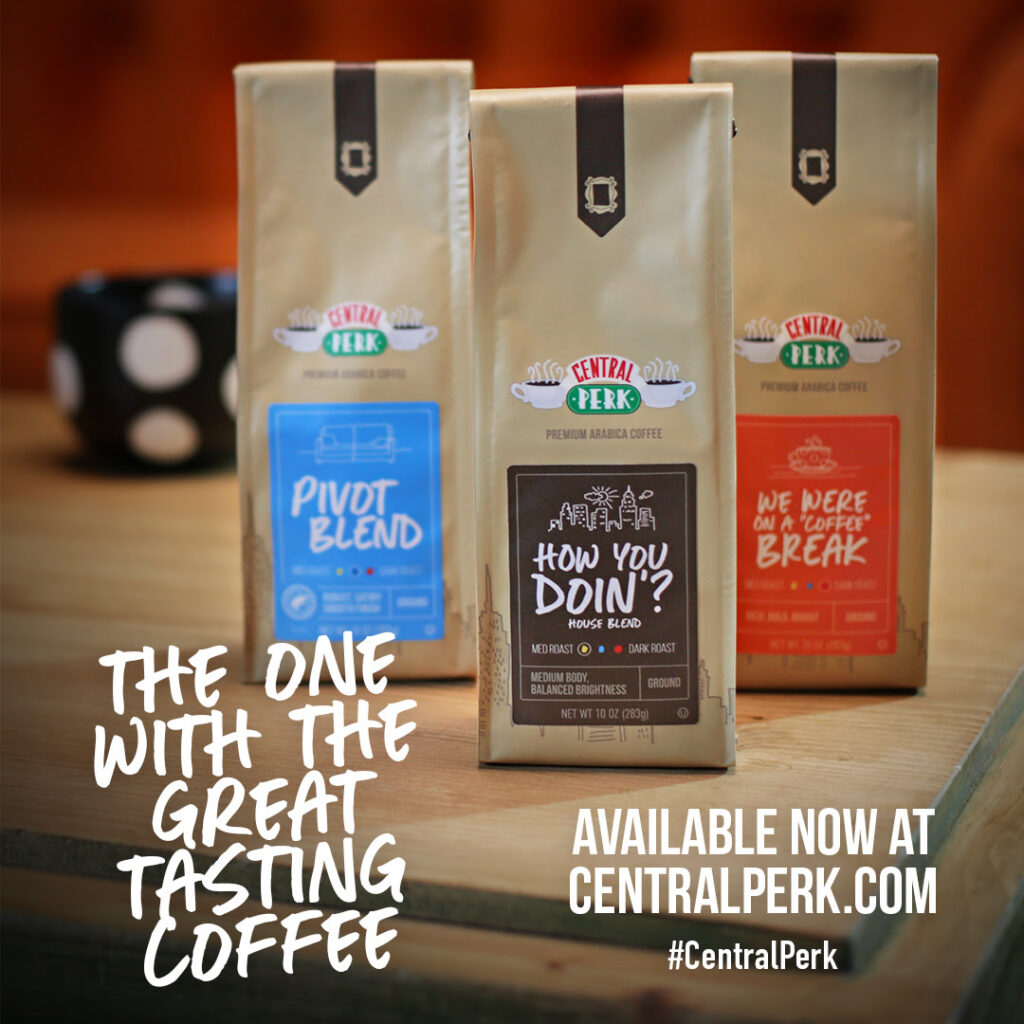 Oh My GAWD! Can we BE anymore excited! We’ve been keeping this quiet for a while now, but we are so pumped to spill the beans!

Friends fans and coffee lovers everywhere can get excited as Central Perk Coffeehouse, a modern-day coffeehouse inspired by Central Perk from the hit TV series, will be opening its first location in 2023. Fans will immediately be able to get their coffee fix now straight to their (purple) doors – with the launch of Central Perk Coffee, a line of artisanal quality coffees made with the highest quality premium Arabica beans (To order: www.centralperk.com)

THE ONE WITH ALL THE COFFEE!

FRIENDS FANS GET READY — THIS IS GOING TO CREATE QUITE A STIR!

For FRIENDS fans and coffee lovers everywhere, today Warner Bros. Themed Entertainment with CenPer Holdings, LLC, comprised of industry experts from the coffee, specialty food and beverage, hospitality, and entertainment worlds — including Top Chef and multiple James Beard Foundation Award Winner Tom Colicchio — couldn’t BE anymore excited to announce Central Perk Coffeehouse, a modern-day coffeehouse inspired by Central Perk from the hit TV series, opening its first location in 2023. Imbued with the same heart and soul as the iconic setting from the series, Central Perk Coffeehouse will be a place for fans (and friends) to slow down and come together over great coffee and eats.

FRIENDS fans know Central Perk as the gathering place for Rachel, Monica, Phoebe, Joey, Chandler, and Ross — the ultimate hang-out spot — not only to get a delicious cup of coffee but also where the gang spent much of their free time conversing and making memories. Fast forward 28 years and a modern-day version will open its real doors in 2023.

“Central Perk is more than just a coffeehouse, it was a home away from home for our six favorite FRIENDS,” said Peter van Roden, SVP, Warner Bros. Themed Entertainment.  “Working closely with the CenPer Holdings team in creating this fresh, yet familiar environment, we’re looking forward to giving fans a Central Perk of their own — coffeehouses that captures the heart of the show while delivering a first-class coffee experience.”

While the first location and opening date will be announced soon, fans will immediately be able to get their coffee fix now with the launch of Central Perk Coffee, a line of artisanal quality coffees made with the highest quality premium Arabica beans available in three select varietals:

Chef and CenPer Holdings Partner Tom Colicchio said of the venture, “Our goal with this partnership and the Central Perk brand, like all of my food and beverage enterprises, is to secure the best ingredients and then deliver superior products and services for a great customer experience. With Central Perk, we can’t wait to offer friends old and new a really enjoyable premium cup of coffee and hope they settle in with us for the next chapter of this beloved story.”

Central Perk Coffee can be ordered beginning August 24 by visiting www.centralperk.com. The first 6,000 new Central Perk Coffee subscribers will receive a complimentary collectable can of “How You Doin’?” coffee, a medium roast ground varietal. This individually numbered limited edition tin was created exclusively for true FRIENDS fans and coffee lovers.

What better way to enjoy Central Perk Coffee than to have it alongside your favorite episodes of FRIENDS? Fans can watch Friends: The Reunion special and binge all 236 episodes of the original beloved series on HBO Max.

Celebrating the 25th anniversary of its debut in 1994, FRIENDS remains one of television’s most beloved series. One of the highest-rated shows on television in its original network run, the series remains a perennial go-to in syndication and on streaming services, where it continues to be a smash hit worldwide. A favorite among critics and fans alike throughout its 10-season run, FRIENDS not only won the Emmy® for Outstanding Comedy series, but also garnered Emmy® Awards for series stars Jennifer Aniston and Lisa Kudrow. From Warner Bros. Television, FRIENDS follows the lives and loves of a close-knit group of friends living in New York City: siblings Ross (David Schwimmer) and Monica Geller (Courteney Cox), along with friends Chandler Bing (Matthew Perry), Phoebe Buffay (Lisa Kudrow), Joey Tribbiani (Matt LeBlanc) and Rachel Green (Jennifer Aniston). FRIENDS was created by David Crane and Marta Kauffman, who executive produced the series with Kevin Bright through Bright/Kauffman/Crane Productions in association with Warner Bros. Television.