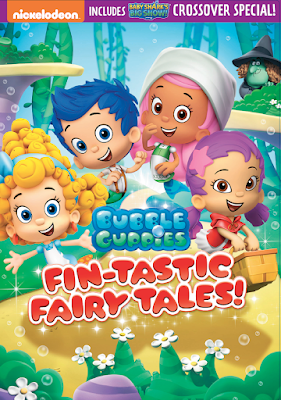 OMG Bubble Guppies has been a huge part of our life for many years.  My son used to watch it all day long. What Time Is It?  Its time for lunch.  Bubble Guppies is such an amazing show for kids that teaches them a lesson and always has a fun adventure under the water to go on.

This dvd is so adorable and filled with all of your favorite characters and a few surprise visitors!! I love how the Bubble Guppies have such a cute way of teaching fairy tales!

Bubble Guppies: Fin-tastic Fairy Tales synopsis:
Join the Bubble Guppies in the most fin-tastic fairy tales of all! First, a witch turns Bubble Puppy into a frog and Molly and Gil need to team up with this fairytale friends to undo her mean green spell! Next, Hansel and Gretel must get Bubble Puppy and Bubble Kitty home safe to their Furry Godmother. Finally, we meet Alison in a place called Wonderland and need to stop the Queen of Hearts from banning Friendship Day across the land!

Check out this mer-mazing recipe for some Under the Sea Rice Krispies inspired by Bubble Guppies: Fin-tastic Fairy Tales! available on DVD on August 2! Click the link to join the baking fun: https://bit.ly/UnderTheSeaTreat
About Nickelodeon
Nickelodeon, now in its 43rd year, is the number-one entertainment brand for kids. It has built a diverse, global business by putting kids first in everything it does. The brand includes television programming and production in the United States and around the world, plus consumer products, digital, location-based experiences, publishing, and feature films. For more information or artwork, visit http://www.nickpress.com. Nickelodeon is a part of Paramount’s (Nasdaq: PARA, PARAA) global portfolio of multimedia entertainment brands.About Paramount Home Entertainment
Paramount Home Entertainment (PHE) is part of Paramount Pictures Corporation (PPC), a global producer and distributor of filmed entertainment.  PPC is a unit of Paramount (NASDAQ: PARA, PARAA), a leading global media and entertainment company that creates premium content and experiences for audiences worldwide.  The PHE division oversees PPC’s home entertainment and transactional digital distribution activities worldwide. The division is responsible for the sales, marketing and distribution of home entertainment content on behalf of Paramount Pictures, Paramount Animation, Paramount Television Studios, Paramount Players, MTV, Nickelodeon, Comedy Central and CBS and applicable licensing and servicing of certain DreamWorks Animation titles.  PHE additionally manages global licensing of studio content and transactional distribution across worldwide digital distribution platforms including online, mobile and portable devices and emerging technologies.

Two winners will receive a Bubble Guppies Fin-Tastic Fairy Tales dvd (RV $10.99) All entries will be verified—only one entrant per mailing address per giveaway. Any person who has won a prize (or whose household has won a prize) in any promotion sponsored by the Sponsor in the past thirty (30) days before this contest start date is not eligible to win a prize in this contest. If you have won the same prize on another blog, you will not be eligible to win it again. Entrants who have created social accounts purely to enter Competitions or Sweepstakes will not be eligible to win. All social accounts used must be public.

The winner will be chosen randomly through Rafflecopter and contacted via email. A reply to the winning email is required within 48 hours before a new winner is chosen. Void where prohibited by law. One person entering per household, please. Chatty Patty’s Place, Tabby’s Pantry, and The Review Wire are not responsible for the shipment of the prize.  Ends 8.16.22